Summary: With news breaking so rapidly, it's possible that even major newspapers or official sources may get information wrong. Social media sites, like Twitter, need to determine how to deal with news tweets that later turn out to be misleading -- even when coming from major news organizations, citing official government organizations.With widespread protests around the United States calling attention to police brutality and police activity disproportionately targeting the black community, the NY Post tweeted a link to an article discussing an internal communication by the NY Police Department (NYPD) warning of concrete disguised as ice cream cups that were supposedly found at some of the protests, with the clear implication being that this was a way to disguise items that could be used for violence or property destruction. 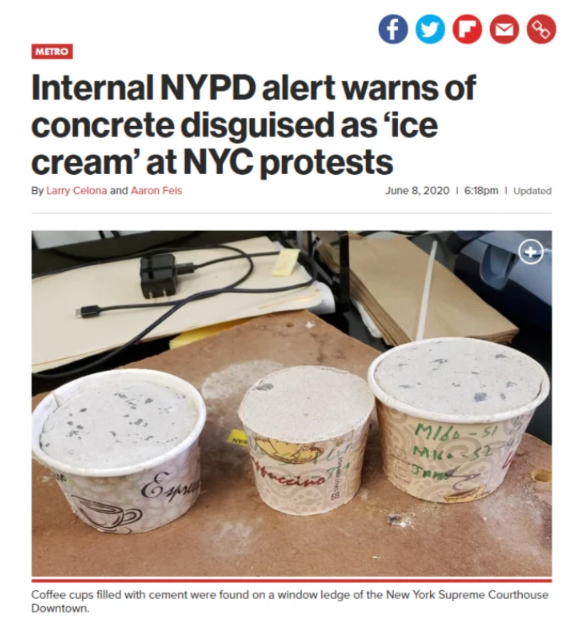 The article was criticized widely by people who pointed out that the items in fact appear to be part of a standard process for testing concrete mixtures, with the details of each mixture written on the side of the containers. Since these were found at a construction site, it seems likely that the NYPD's alert was, at best, misleading.In response to continuing criticism, the NY Post made a very minor edit to the story, noting only that the markings on the cups make them resemble concrete sample tests commonly used on construction sites. However, the story and its title remained unchanged and the NY Post retweeted it a day later -- leading some to question why the NY Post was publishing misinformation, even if it was accurately reporting the content of an internal police memo.Questions for Twitter:Questions and policy implications to consider:Resolution: To date, Twitter has left the tweets up, and the NY Post article remains online with only the very minor edit that was added a few hours after the article received widespread criticism. The NY Post tweets have not received any fact check or other moderation to date. There are, however, many replies and quote tweets calling out what people feel to be misleading aspects of the story (as well as plenty from people taking the content of the story at face value, and worrying about how the items might be used for violence).