Summary:In the lead-up to the 2018 midterm elections in the United States, progressive voters in seven competitive races in the Midwest were targeted with a series of Facebook ads urging them to vote for Green Party candidates. The ads, which came from a group called America Progress Now, included images of and quotes from prominent progressive Democrats including Bernie Sanders and Alexandria Ocasio-Cortez with the implication that these politicians supported voting for third parties. The campaign raised eyebrows for a variety of reasons: two of the featured candidates stated that they did not approve the ads, nor did they say or write the supposed quotes that were run alongside their photos, and six of the candidates stated that they had no connection with the group. The office of Senator Sanders asked Facebook to remove the campaign, calling it “clearly a malicious attempt to deceive voters.” Most notably, an investigation by ProPublica and VICE News revealed that America Progress Now was not registered with the Federal Election Commission nor was any such organization present at the address listed on its Facebook page. 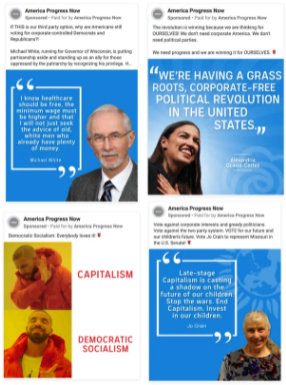 In response to Senator Sanders’ office, and in a further statement to ProPublica and VICE, Facebook stated that it had investigated the group and found no violation of its advertising policies or community standards.Two years later, during the lead-up to the 2020 presidential election, an investigation by the Washington Post revealed a “troll farm”-type operation directed by Rally Forge, a digital marketing firm with connections to Turning Point Action (an affiliate of the conservative youth group Turning Point USA), in which multiple teenagers were recruited and directed to post pro-Trump comments using false identities on both Facebook and Twitter. This revelation resulted in multiple accounts being removed by both companies, and Rally Forge was permanently banned from Facebook.As it turned out, these two apparently separate incidents were in fact closely connected: an investigation by The Guardian in June of 2021, aided in part by Facebook whistleblower Sophie Zhang, discovered that Rally Forge had been behind the America Progress Now ads in 2018. Moreover, Facebook had been aware of the source of the ads and their deceptive nature, and of Rally Forge’s connection to Turning Point, when it determined that the ads did not violate its policies. The company did not disclose these findings at the time. Internal Facebook documents, seen by The Guardian, recorded concerns raised by a member of Facebook’s civic integrity team, noting that the ads were “very inauthentic” and “very sketchy.” In the Guardian article, Zhang asserted that “the fact that Rally Forge later went on to conduct coordinated inauthentic behavior with troll farms reminiscent of Russia should be taken as an indication that Facebook’s leniency led to more risk-taking behavior.”Company considerations:Issue considerations:Resolution:A Facebook spokesperson told The Guardian that the company had “strengthened our policies related to election interference and political ad transparency” in the time since the 2018 investigation, which revealed no violations by America Progress Now. The company also introduced a new policy aiming to increase transparency regarding the operators of networks of Facebook Pages.Rally Forge and one of its page administrators remain permanently banned from Facebook following the 2020 troll farm investigation, while Turning Point USA and Turning Point Action deny any involvement in the specifics of either campaign, and Facebook has taken no direct enforcement action against those groups.Originally posted to the Trust and Safety Foundation website.